How to Teach Decomposing Numbers Conceptually

Primary teachers feel loads of pressure to ensure that their students are able to understand and master basic mathematical concepts.  Because the subject of mathematics begins with a foundation of knowledge that builds upon itself over years of schooling, students must have a firm grasp of the foundational skills of math in order to be successful in later years.

As an upper elementary teacher, I cannot tell you the number of times that I have encountered students who still do not fully understand basic mathematical concepts, such as decomposing numbers.  Students who struggle to add and subtract often do not have the understanding of how single-digit numbers can be broken up into even smaller numbers.  This deficit not only affects their arithmetic skills, but it also affects their ability to grasp higher-level concepts, such as decimals and fractions.

The key to teaching decomposing numbers is giving students the opportunity to play with numbers rather than simply providing a simple algorithm or forcing the ever-so-popular “skill and drill” approach to teaching.

Now, you may be hesitant like I was at first to spend valuable instructional time allowing students to play with math manipulatives, but believe me, it is absolutely essential for them to be able to have this time to explore and come to their own conclusions about numbers.  When students are able to manipulate objects and express their observations, their brains make more neural pathways in relation to math, which then allows them to excel in math in the future.

Start with a five-frame and double-sided counters.  I’ve found that it is best to laminate the five-frames so they last longer and can be easily wiped down.  Give each student their own frame and exactly five counters.  Have them place all of their counters on the five-frame (one in each box) and tell you what they notice.

Some prompts you may want to use are:

“How do you know there are five?”

“Are there any empty spots on your frame?”

Give the students time to ponder and discuss these questions with a partner, table group, our as a whole class.

Then, dive a little deeper.  Notice if any of the students used both sides of the double-sided counters.  Did any of them use some yellow and some red on their frame?  Did any use all of the same color?

It’s not time yet to get into making these into addition statements, but have them state what they did out loud.  Some students may already be able to verbalize that 2 yellow and 3 red counters make 5 total, but others still need to manipulate, observe, listen, and talk about this concept without thinking of equations.

Tell the students that you are going to talk more about this the next day.

On the second day, give the students the same materials – a five-frame and five counters.  Ask them to put one counter in each box, but this time, ask them to pay attention to the colors of their counters and see if they can come up with a different way to show five than they did the previous day.

You will have varied responses to this – some students may continue to put all of their counters with the same color showing, some may do an ABAB pattern, and others may lump a few yellow together and a few red together.  All of these are still acceptable for their exploration phase.

Again, prompt them to discuss what they notice.  Today, also prompt them to state how many counters they have.  You may give them a sentence frame to help initiate discussion:

This discussion will take yesterday’s lesson to the next level as they are now differentiating between the colors of the counters and recognizing that the total is still five, regardless of what colors they used.

They should now be ready for the “Shake and Spill” game.  You can use a recording sheet for this game, or you can continue with student discussions.  Either way, the kiddos are going to get the hang of decomposing the number 5.

Demonstrate for the students how to play.  Take all five counters in your hands and shake them around before dropping (spilling) them on the desk.  You may want to give them a small Dixie cup to shake their counters in and a small box or piece of paper for them to spill in.

After shaking and spilling, they should arrange their counters on their five-frame, keeping all of the yellows together and all of the reds together.  For example, if they spilled and had 2 yellow counters and 3 red counters, they would group them together on the frame rather than creating a pattern out of them.

Students should then use the same sentence frame as before:

They can repeat this activity for the remainder of their math lesson, discussing their results with a partner and/or recording their work on a simple “Shake and Spill” recording sheet.  Please note that if you use a recording sheet, the students will also need a yellow and red coloring utensil to record.

I like to tie it all together at the end of the lesson by making an anchor chart with all of the combinations that they created.  The students can then share all of the ways that they were able to make 5, and you can record them for later reference.  It’s great to be able to put them in a logical order as well so that they can see the pattern in yet another way.

On Day 3, you can introduce the ten-frame.  Provide each student with his or her own frame.  Before giving them the counters, have them tell what they notice about the ten-frame.  They may state that it is bigger than the five-frame.  Some students may even say that it can fit 2 five-frames.  Facilitate conversation around their observations.

Then provide them with ten counters.  Go through the same process with having them place the counters on their frame (one in each box) and telling you what they notice.

Their verbal responses will be more advanced now as they have been exposed to noticing the color of the counters.  If you are hearing them chatter about their different colors, celebrate with them! They are having “ah-ha” moments and making connections to larger numbers!

Again, have them discuss what they notice about the frame, how many counters they used, and how they know that there are ten counters on the frame.  This helps develop recall when they see ten-frames in the future.

Build on this connection by playing “Shake and Spill” with 10 counters.  Again, they should group the same color counters together in order to visually see an equation prior to looking at equations abstractly.  You can have them discuss their findings and observations, or you can have them record their work on a recording sheet.

I prefer to transition from discussion to a recording sheet because it allows them to not only see the number relationship with manipulatives, but it gives them a chance to transfer it onto paper and then actually write out the number sentence, making even more connections for them in the process.

Sign up for our newsletter to receive your FREE templates! 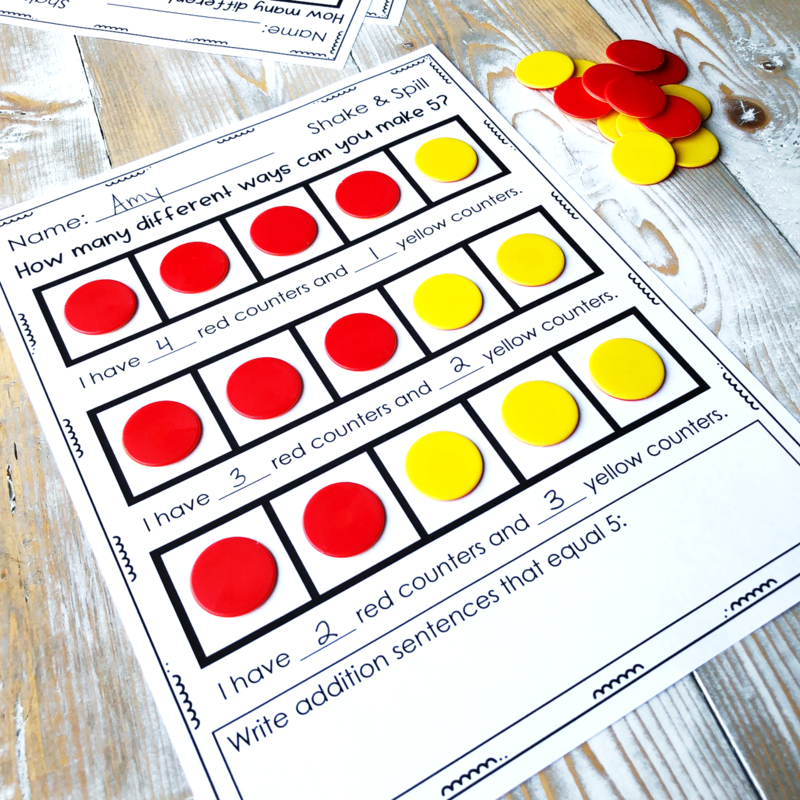 End the lesson with another anchor chart for their reference.  Many of them will notice that there is a pattern that can be made for making 10 that they saw with the “Making 5” anchor chart.

The concept of decomposing numbers is invaluable to your students and the rest of their mathematical careers.  If they can make connections with single-digit numbers, you have set them up to be successful with larger numbers. 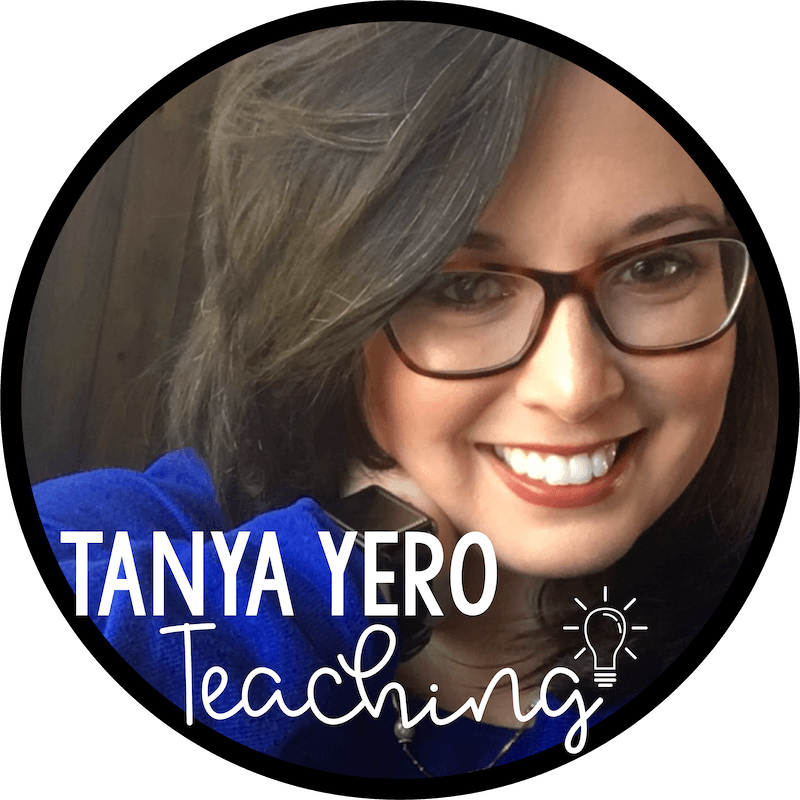 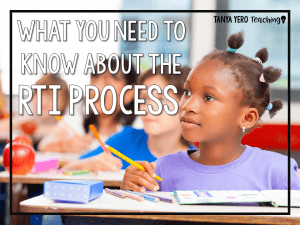 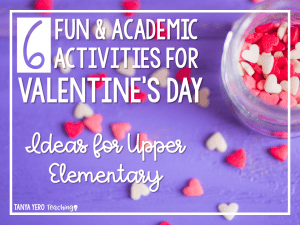 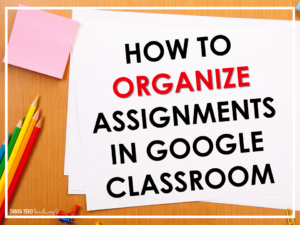